A downloadable game for Windows and Linux

Impact Nine is a hectic arena game based around 9 different characters. In it, the player faces eight other AI-controlled enemies in a deathmatch for points.

Each character features a distinct playstyle to toy with, from teleportation attacks to aimed explosions. They are: VELN, TARK, SHOT, DASH, BOOM, NOVA, IRIS, KOSM and LUNA.

A speedy triangle capable of killing anyone that touches it.

A mighty, tanky square that can take two hits. Its attack is a short charge.

A capable and relatively fast shooter that unleashes volleys of bullets upon its enemies.

A quick dasher whose power is to teleport through the environment and kill anyone between the points of departure and arrival. Can also activate a shield.

A powerful hexagon that can create shorts bursts of explosion anywhere within its range. This power has no cooldown.

A devastating 5-pointed star that attacks with big, cross-shaped blasts. These powers, however, have a long cooldown, which can be cut down in half with good timing.

A deadly sniper that can increase its field of view at the cost of movement. Its attacks have almost infinite range.

A smart diamond that has 4 revolving squares spinning around it. Their range can be adjusted, and their speed can be increased momentarily.

A stealthy 4-pointed star that can phase between planes, killing anyone nearby when it gets back to the normal plane.

The game also has a Nemesis System, in which two random enemies become significantly more powerful at the start of the game. One of them becomes a rival to the player, sticking with its Nemesis status throughout the entire game. The other Nemesis loses its powers after death, and a new Nemesis is randomly chosen. With this, the game becomes more dynamic, as different rivals appear during the course of the match.

The game has 4 background songs to choose from (all from Kevin MacLeod), an option to turn the Nemesis System on and off, and a setting for the target score, enabling the player to choose their length of play. 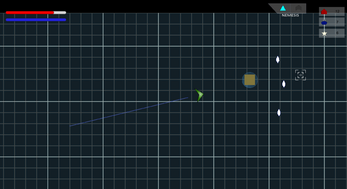 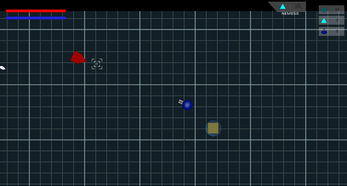 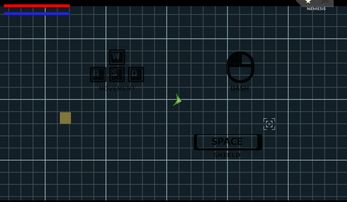 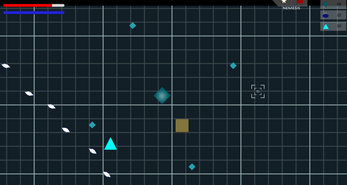 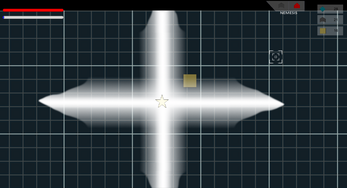